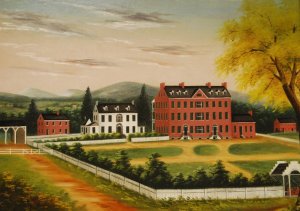 July 31 marks a double anniversary. Four years ago today the Province of St. Louise USA began from the former US provinces of Albany, Emmitsburg, Evansville, and St. Louis. On this day in 1809 St. Elizabeth Ann Seton began the Sisters of Charity of St. Joseph’s, in Emmitsburg, MD, on the same grounds which today house the Emmitsburg Campus of the Daughters of Charity and the National Shrine of St. Elizabeth Ann Seton.

The photo shows an oil painting of the Emmitsburg grounds as they appeared in 1825. The building in the middle is Mother Seton’s White House, which can still be seen today.

One response to “Happy Anniversary!”