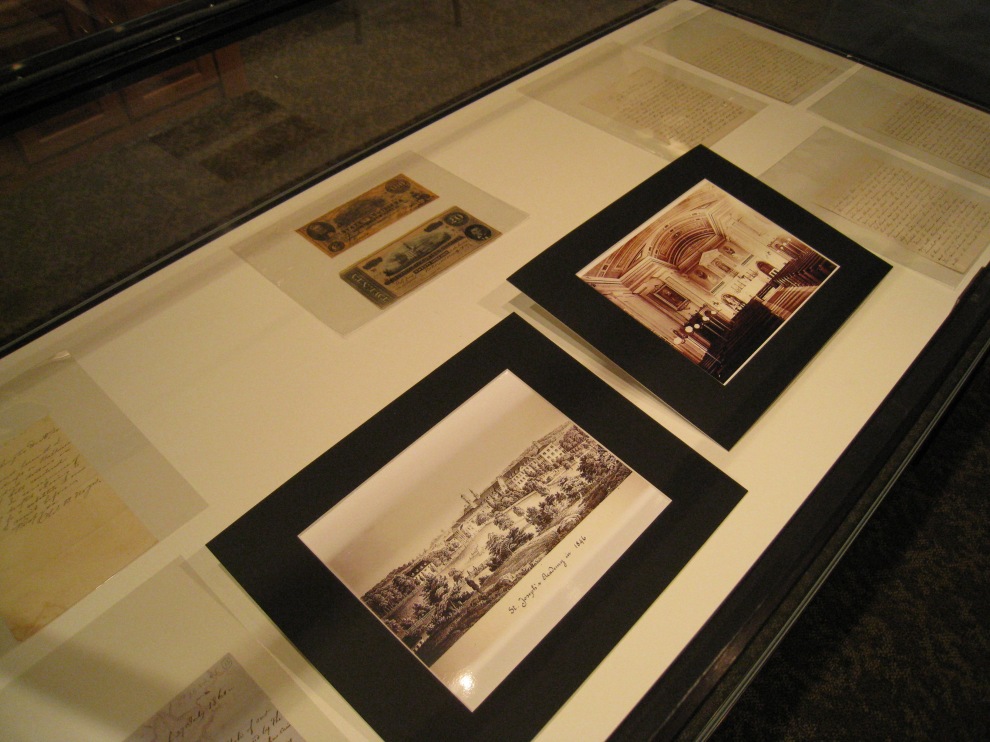 Display case with picture of St. Joseph’s Academy, Emmitsburg, in 1846

Below are the “voices” of Sr. Marie Louise Caulfield and Father Burlando which were read as part of the opening day’s gallery talk.
(Exerpts from Provincial Annals and Letters of Father Francis Burlando used with permission of the Daughters of Charity Provincial Archives)

“Voice” Sr. Marie Louise Caulfield
[Provincial Annals, 1863]
“It was a Saturday night,” said Sister Marie Louise in giving an account of the fact. “It was a Saturday night, and the Sisters were all retiring totally unconscious of the approach of the army.”
Sister Marie Louise was at that time secretary of the Community, and occupied the same sleeping apartment as Mother Ann Simeon in the Southeastern part of what was called the “Gothic Building.” The Secretary communicated by folding doors always left open, and was merely an extension of this room. The southern and western windows commanded a fair, open view, unobstructed as it is now by the Academy building reared in 1872-`73.
Mother Ann Simeon was in bed, Sr. Marie Louise not yet. She tho’t she heard unaccustomed sounds; she listened; they did not cease. She went to the window, and looked out. The confused sounds became clearer, the neighing of horses was distinctly heard and the flashing of lights seen here and there on the hill towards the tollgate. Mother Ann Simeon was up in a minute, and both dressed hurriedly. They knew the army was upon them. They came silently over to the Academy building. There was no means of indoor communication, as there is now, and they came across the porches, ascending the exterior staircase that led from the lower porch up by the children’s Infirmary. Entering that way they stole quietly up to the observatory over the music rooms, followed by Sisters who had also been disturbed by unaccustomed sounds. There they stood, listening and watching through the dark the lights of the vast army encamping in the fields around St. Lazare’s …
“Voice” of Father Francis Burlando
[Letter to Sisters of the US Province, November 30, 1860]
From various circumstances it would seem that designing fanaticism threatens to sever the union of our beloved Country.
If the Confederacy of the different States of the Republic is preserved, peace, harmony, confidence & prosperity will reign in our midst and Religion will continue to progress, triumphing over error & prejudice; if on the contrary the union be dissolved, disorder, mistrust, poverty & civil war with all their sad appendages will be the almost inevitable consequences …

[Letter to Sisters of the US Province, September 15, 1861]
Emmittsburg Sept 15th 1861.
For some months past you have no doubt, anxiously viewed the gathering storm which is threatening the beautiful horizon of our Country — you are aware of the conflicting opinions which disturb the peace of our Cities & distract the minds of our Citizens — Friend is armed against friend, & brothers, Fathers, & Sons enlist on opposite sides, in the struggle — Our once happy land is plunged in anarchy & confusion, & deluged with the blood of its own sons.

In this sad & lamentable state of things, I think it my duty to remind you, my dear Sisters of the maxim of St. Vincent, which was, to refrain from uttering Political sentiments – this judicious silence he left to his children as a legacy after his death as he had practiced & warmly recommended it during life — You, as his devoted Daughters understand the obligation of adhering strictly to the wise lessons he gave you, & consequently, you will carefully abstain from speaking or writing about political affairs of our Country –

It is not the sphere of the Daughters of St. Vincent to discourse about Politics of which they are, & should be uninformed – Their only duty is to sanctify themselves in the Exercise of charity according to their Rules; they leave State affairs to God & to those entrusted with them – They have no Enemy but pride & the evil spirit – North, South, East or West are alike to them; every afflicted member of society is their friend & an object of their Solicitude, because he represents their suffering Saviour …
… Pressed by the charity of Jesus Christ, they have renounced the maxims of the world & consecrated their life to do good to all whether Christian, Turk, or Jew … Hers is a ministry of love … She is at home wherever there are miseries to be alleviated; pains to be soothed, tears to be wiped away, & broken hearts to be consoled; these are the objects of her solicitude & charity — Let therefore, no Political difficulties occupy your thoughts or your precious time, except before the Altar of God — He alone can still the storm & give us peace …

[Letter to Father Jean-Baptiste Etienne, CM, Superior General of the Vincentians and Daughters of Charity, Emmitsburg, July 8, 1863]
You have been informed, without doubt by the papers that we have been visited by the Army of the Potomac, and that very near us has been fought a terrible battle, the most bloody since the secession. St. Joseph has well taken care of his House, and St. Vincent of his Daughters; we have not been troubled, or at least we have escaped with the slight loss of a little forage and some wooden palings which have served for the wants of a portion of the army.

The evening of the 27th of June the troops commenced to appear upon a small hill, a little distance from St. Joseph’s; regiment after
regiment, division after division, all advanced with artillery and cavalry, and taking possession of all the heights, encamped in order of battle; the 28th, the 29th, and the 30th, we were completely surrounded. St. Joseph, and the little village of Emmitsburg were in the center of a part of the army 80,000 strong. General Howard and his suite took possession of our house in Emmitsburg; General Shultz and his suite were close to St. Joseph’s, in the house which served some time since for an orphanage; the other Generals took up quarters in different houses along the line of army …
For the protection of St. Joseph’s General Schultz gave orders that guards should be posted in its environs, and Gen. Howard did the same for our little place in Emmitsburg. A great number of officers asked permission to visit the House, and all conducted themselves with greatest respect, expressing their gratitude for the services which the Sisters rendered the soldiers in Military Hospitals … During this time I heard a good number of confessions, and our Sisters distributed a large quantity of medals and chaplets, as also, be it understood bread, milk, and coffee.