Novena for the Feast of the Nativity (St. Louis, 1940) (used with permission of the Daughters of Charity Provincial Archives) 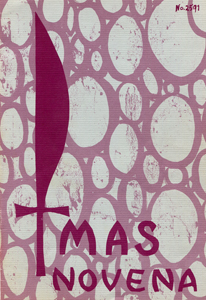 December 16 marks the beginning of a beautiful musical tradition within the Vincentian Family, the singing of the Christmas Novena.

The Novena for the Feast of the Nativity of Our Lord Jesus Christ, commonly known as the Christmas Novena, was composed in 1721 by Father Charles Vachetta, C.M., for use in the chapels and churches of the Congregation of the Mission and the Daughters of Charity, beginning on December 16 and ending on Christmas Eve. Father Vachetta gathered most of his source material from the prophecies of the Old Testament which were especially concerned with the coming of the Redeemer, as well as the Roman Missal, the Breviary, and the Graduale Romanum.

Originally written in Latin, the Novena was edited and arranged in English in the 1960s by Sister Jane Marie Perrot, D.C., of St. Joseph College in Emmitsburg, Maryland. The images seen here are covers from two editions of the Novena held by the Provincial Archives: the 1940 Latin edition (left) and the 1966 English arrangement by Sister Jane Marie (right).

For a scholarly article on the history of the Christmas Novena, see: 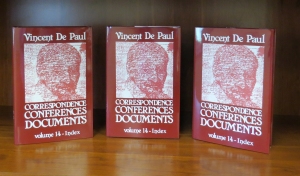 Volume 14 of the Correspondence, Conferences, and Documents of St. Vincent de Paul

After more than 40 years devoted to the preparation of the English edition of the correspondence, conferences, and documents pertaining to Saint Vincent de Paul, Volume 14, the cumulative Index, marks the culmination of the entire series. Yesterday the long-awaited copies of Volume 14 arrived at the offices of the Vincentian Translation Project. Sister Marie Poole (left), editor-in-chief of the Vincentian Translation Project, is seen here with editorial assistant Sister Ann Mary Dougherty.

The Provincial Archives congratulates Sister Marie, Sister Ann Mary, and the many collaborators who have worked on the project for the last 40 years.

Louis Joseph Francois was born February 3, 1751 and ordained in 1773. He devoted himself primarily to parish ministry. He was killed at St. Firmin’s Seminary (formerly College des Bon Enfants) in Paris along with John Henry Gruyer.

John Henry Gruyer was born near Dole on June 13, 1734. After his ordination he devoted his life to the formation of clergy. He was murdered at St. Firmin’s Seminary where he was superior on September 3, 1792, for refusing to take the Constitutional Oath.

Peter Rene Rogue was born June 11, 1758 and ordained a priest in 1782. His ministries were the education of clergy and parish ministry, in spite of the dangers of the Revolution. He was beheaded in his native town of Vannes on March 3, 1796.