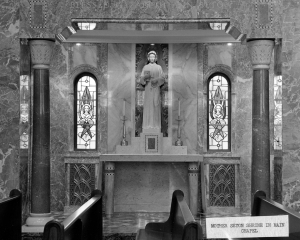 For Throwback Thursday and the anniversary of Elizabeth Seton’s canonization coming up this weekend, here is a view of the Seton Altar in what is now the Basilica of the National Shrine of Saint Elizabeth Ann Seton before Mother Seton’s remains were formally transferred there in 1968. Look closely and you’ll see the words “Blessed Elizabeth Ann Seton” above the statue. Mother Seton was canonized on September 14, 1975 by Pope Paul VI.

Elizabeth Ann Seton’s remains have resided in a number of different locations on the Emmitsburg Campus since her death. When she died in 1821 she was buried in St. Joseph’s Cemetery, the original cemetery on our grounds. A headstone marking her original burial spot can still be seen today. In 1845 the Mortuary Chapel, located in St. Joseph’s Cemetery adjacent to Mother Seton’s first burial spot, was built to house her remains; her remains were transferred to the Mortuary Chapel in 1846. The Mortuary Chapel still stands as well. After her beatification in 1963 Mother Seton’s remains were placed in a copper casket and transferred to a niche above the main altar in the chapel at St. Joseph’s Central House. The chapel, located just south of our current campus, is now part of FEMA’s National Emergency Training Center. In 1968 her remains moved for the final time to the Sisters’ Chapel at St. Joseph’s Provincial House, now the Basilica of the National Shrine of Saint Elizabeth Ann Seton. The Basilica is open to the public and can be viewed from 10:00am – 4:30pm every day.