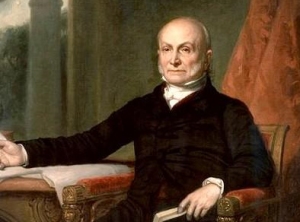 In February we remember the birthdays of two of the nation’s greatest presidents, George Washington and Abraham Lincoln. During the month of February we will be highlighting connections between the Daughters of Charity and Presidents of the Unites States. We begin with John Quincy Adams, President from 1825-1829.

To enable the Sisters to own real estate in the District of Columbia, Congress incorporated the Sisters of Charity of St. Joseph’s, together with the Sisters of the Visitation of Georgetown, in a single act which was signed by Adams May 24, 1828. The original act named 61 Sisters (probably all in the Community at that time) and their successors as long as they remained in the Sisterhood, and the corporation was given perpetual existence.

The Sisters’ ministry in Washington DC began in 1825, when they were asked to staff a free school, known as St. Vincent’s. Their small cottage soon served as an orphanage as well as a day school. Before the end of the first year there were thirty orphans. In 1831, at the request of Father Deagle of Saint Peter’s Parish, sisters were sent to open Saint Paul’s Academy on Capitol Hill, a pay academy to support a free school. The school was well patronized, but the sisters had no opportunity for Mass and the sacraments, and so the Community withdrew in 1834. Daughters of Charity ministries in Washington which are still active include St. Ann’s Center for Children , founded in 1850, and Providence Hospital, founded in 1861.