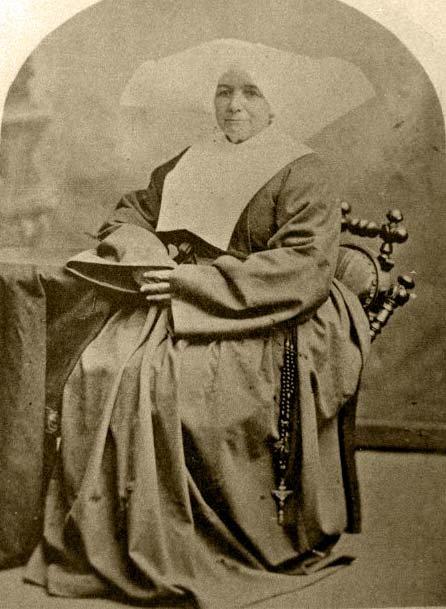 Request and Response
Our story in San Francisco began when Bishop Alemany requested Daughters of Charity in Emmitsburg, Maryland to care for children orphaned in a cholera epidemic; Sisters were promised for the near future. In the meantime, Catholic gentlemen in the city, concerned about the orphaned children and knowing the Sisters would soon come, began planning for an orphanage and school, the Roman Catholic Orphan Asylum & Free School.

Journey
These seven Sisters embarked on a two-month journey from Emmitsburg to New York to Panama to San Francisco in the summer of 1852. They left Emmitsburg on June 17th, traveling by stage to New York and from there by steamer to Panama along with the 4th Infantry of the United States Army. The wife of one of the soldiers died, leaving a one-year-old daughter, Nellie, whom the soldier-father asked the Sisters to take to their new orphanage in San Francisco. This they did and we remember Nellie as our first orphan.

Passengers disembarked in Aspinwall (now Colon) and began their journey across the Isthmus, traveling first in rail cars; then by boat on the Chagres River; and lastly rode on muleback into Panama City. The journey on mules through a mountainous jungle was horrendous.

Cholera was raging across the Isthmus with many passengers dying; two of the seven Sisters, Honorine and Ignatia, died in Panama City and are buried there. The five surviving Sisters were all sick, but journeyed on to San Francisco.

Arrival
Early on August 18th, the Sisters arrived in San Francisco but did not disembark until much later. There was no one there to greet them, but fortunately, Sister Frances met an old friend from St. Louis, Eugene Kelly, who procured a carriage for them.

The carriage brought the Sisters to their new home on Market & Montgomery Streets in the area known as Happy Valley. The Sisters had lived in the more established cities of the East and were now to experience life in this frontier city.

The orphanage began as soon as the Sisters arrived in San Francisco as they had assumed the care of Nellie during the journey; six weeks later, the school began. Orphanage & school were called the Roman Catholic Orphan Asylum & Free School and both were housed in the same building. Living and working conditions were cramped within these walls as it was a Church on Sundays, a school on weekdays and an orphanage with dormitories at night.

Pioneer Sisters
Our Pioneer Sisters were courageous and adventuresome women. Four of the surviving Sisters were in their forties when they journeyed to California and lived nearly two or three decades in San Francisco and elsewhere. They were hardy and strong.

One response to “Journey to California”