The Daughters of Charity Cornette – Part 5

Mother Elisabeth Montcellet, Superioress General of the Daughters of Charity at the time of the Civil War

Mother Ann Simeon Norris, Visitatrix of the U.S. Province at the time of the Civil War

Part 4 discussed the change from black cap to cornette and how the difficulties of importing material from France led to a gradual change to the cornette in the United States. The problem of importing material from France surfaced again during the Civil War. In 1864 Mother Ann Simeon Norris, Visitatrix of the US Province, sent a petition to Congress asking that the material for the Sisters’ clothing be exempt from import duties. Her petition read:

“The Sisters of Charity most humbly represent to the Senate and House of Representatives of the United States that the uniform worn by them, being only manufactured in France, they solicit the favor of having it admitted free of Duty.

They have been advised to make the appeal by His Excellency the President to whom they applied some time since for said favor. He very kindly replied: That in consideration of the service the Sisters had rendered the Union Soldiers in the different Hospitals of the United States, He would most willingly grant them this favor, but that the law required an act of Congress in such matters. He therefore recommends us to lay the case before your humble body.

Armed with his powerful influence, we confidently hope, you will grant our Petition.”

Here is an image of Mother Ann Simeon’s letter to Congress.

Mother Ann Simeon’s petition did receive attention from Congress. In late December 1864 a bill was introduced in the Senate (S. 366) which would have remitted duties paid by the Sisters. Unfortunately, S.366 died in committee and never made it to Lincoln’s desk.

From The Senate Journal of December 20, 1864, p.37:
Mr. Hale presented the memorial of Sister Ann Simeon Norris, Mother Superior of the Sisters of Charity, praying that the material for the manufacture of the uniform worn by the Sisters of Charity may be imported free of duty; which was referred to the Committee on Finance.

From The Senate Journal of December 21, 1864, p.42:
Mr. Hale asked, and by unanimous consent obtained, leave to bring in a bill (S. 366) to remit certain duties on clothing materials imported for the use of the Sisters of Charity of St. Joseph; which was read the first and second times, by unanimous consent, and referred to the Committee on Finance.

From The Senate Journal of January 6, 1865, p.52:
Ordered, That the Committee on Finance be discharged from the further consideration of the bill (S. 366) to remit certain duties on clothing materials imported for the use of the Sisters of Charity of St. Joseph. [note 1]

100 years later, in September of 1964, the Daughters of Charity set aside the much-recognized and much-beloved cornette, as part of the sweeping changes of Vatican 2. Our final post will focus on that change.

Notes
note 1. The complete text for the Senate Journal showing action on the Sisters’ petition is available online at
A Century of Lawmaking for a New Nation: U.S. Congressional Documents and Debates, 1774-1875, part of the Library of Congress American Memory Project. To find the text concerning the Sisters of Charity petition, select “Senate Journal”, then search on “Sisters of Charity”.

The Daughters of Charity Cornette – Part 4

Mother Clementine Mazin, Superioress of the Daughters of Charity at the time of the American union with France.

On March 25, 1850, Sisters in Emmitsburg renewed their vows according to the vow formula of the Daughters of Charity for the first time. The formal union came in November of 1850. During the year 1850 four sisters were sent from Emmitsburg to France to become imbued with the spirit and practices of the Daughters of Charity: Sisters Vincentia Repplier, Valentine Latouraudais, Ann de Sales Farren, and Marie Louise CaulfIeld. Sister Marie Louise spoke French fluently and was chosen to be trained as the fIrst secretary of the American province, an office she held for almost half a century. In 1851 Sisters Etienne Hall and Ann Simeon Norris traveled to France. Both Sisters later served as Visitatrix of the American Province. [note 1]

During a retreat for sister servants held at Emmitsburg in October 1850, Sister Vincentia and her three companions, recently returned from France, modeled for all the blue habit and white cornette. On December 7, 1851, all the Sisters in Emmmitsburg wore the cornette for the first time. [note 2]

It took until September of 1855 for the entire American province to change from the black cap to the cornette. There were several reasons for this. One was the geographic reach of the province. By 1850 the American province had spread far beyond Emmitsburg, with Sisters as far north as upstate New York, as far south as New Orleans and Mobile, and as far west as St. Louis and Detroit. Another was the difficulty of obtaining the needed material. Since the time of Vincent and Louise it had been the custom of the Daughters of Charity for all Sisters to have their attire provided by the Mother House in Paris. In 1850, the Mother House did not make each Sister’s habit, but the material, a heavy, navy-blue wool, was imported from France. Difficulties in acquiring material, along with the time required to make habits for all the American Sisters, meant that the change from the black cap to the cornette was a gradual one. The issue of importing material from France came up again during the Civil War; this incident will be the subject of Part 5.

The Daughters of Charity Cornette – Part 3

(Image used with permission of the Daughters of Charity Provincial Archives) 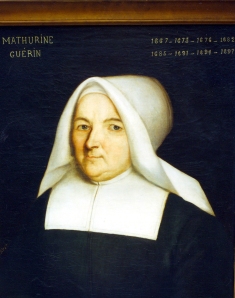 Both Vincent de Paul and Louise de Marillac died in 1660. The photo shows Mother Mathurine Guerin, 3rd Superioress General of the Daughters of Charity. The original portrait, along with portraits of all the community’s major superiors, hangs at the Daughters of Charity’s Mother House in Paris; the image seen here comes from a photograph in the Provincial Archives. We are especially indebted to Sister Elisabeth Charpy, D.C. for the content of this post, which is based heavily on her series of articles on Mother Mathurine Guerin in Echoes of the Company, 1986.

During Mother Mathurine Guerin’s 21 years as Superioress General of the Daughters of Charity, the community saw a great increase in the number of Sisters, the opening of more than 100 houses, and the opening of a second Seminary in Normandy. Also during her tenure, Father Rene Almeras, the first successor to Vincent de Paul as Superior General of the Congregation of the Mission and Daughters of Charity, arranged the community’s common rules into chapters. The community’s common rules, as arranged by Father Almeras and published in 1672, were used by the Daughters from the 17th century to the time of Vatican II.

“The object of this Circular is to inform you that Father Jolly, our Most Honoured Father, having been informed that many of our Sisters were under the necessity of wearing the cornette, on account of the inconveniences they experience from the great cold in winter and the heat in summer, in serving the sick, which often obliged them to wear it for a time, thus causing a dissimilarity, some being able to do without it , and others not; all this having been considered, with the opinions of many persons of piety who found fault with the want of modesty of our head-dress, [Father Jolly] has permitted all to wear it on condition that it shall not be of finer quality than our other linen, for fear that what is allowed through necessity, may become an occasion of vanity.”

In the words of Sister Elisabeth Charpy:

“The guiding principle behind such a decision was the service of the Poor. But Mathurine knew the dangers of feminine vanity. In certain regions of France, cornettes, also called coiffes, were made of fine material and ornamented with lace. Therefore she stressed the necessity of meoderation required from servants of the Poor.”

In Mother Mathurine’s time, the cornette fell loosely to the shoulders, as seen in the photo. Over time it was modified. Starch was used to stiffen it, and its edges were raised to form wide-spread wings. Over the centuries, the wings became progressively higher. By the end of the 19th century, the cornette had taken on the appearance that has become familiar to many.