Daughters of Charity in the Pacific Theater: World War II 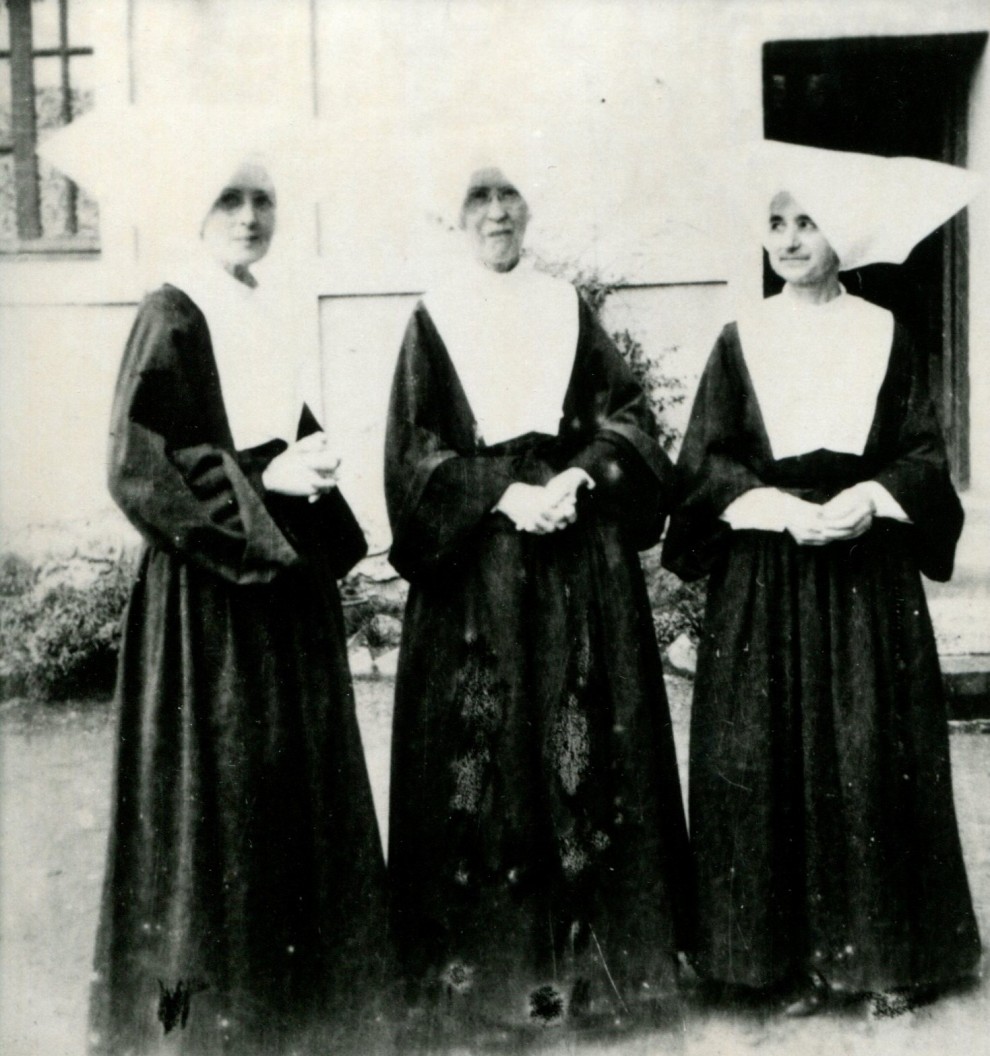 Sisters Clara Groell, Eugenia Biggs, and Catherine O’Neill outside barracks, Aug. 1945. These three sisters were missioned in China and ended up serving as U.S. Army nurses in the Pacific theater of World War II.

For the American Daughters of Charity on mission in China during the Sino-Japanese War – a conflict known as the Second Sino-Japanese war, which had once again ignited in 1937 between the Republic of China and the Empire of Japan – the war between these two countries merged into the great conflict of World War II. The Daughters were missioned at “St. Margaret’s House, Kanhsien Kiangsi, Free China,” located in the southern region of the country.

By 1941, when writing to their provincial house in Emmitsburg, Md. their letters with the address stamped on the stationery signaled the dangerous situation they now found themselves in as the war continued to creep southward. More and more, letters home recounted another night spent in anticipation of an air raid. Finally, on June 27th, 1944, Sr. Vincent Louise DeLude informed her Visitatrix at the Central House in Emmitsburg that they had been forced to flee.

Travel outside the country was still dangerous, so the Sisters turned inward, further into the country. They took up residence with the U.S. Army in Kunming, which was building airfields that could supply Allied troops. The chief nurse on base there, it turned out, was even a graduate of the Daughters’ nursing school at Charity Hospital in New Orleans!

Under the auspices of Rev. Joseph McNamara, Assistant Theatre Chaplain, the Daughters were able to once again write to Emmitsburg; but this time, the letters were written requesting necessities unobtainable for the past several years. Sisters Emily Kolb and Catherine O’Neill were both sent new pairs of glasses, and each of the Sisters was able to replace shoes that had been worn out since 1941.

Of course, military mail regulations reveal themselves in this exchange below. Sister Vincent Louise wrote: “The Canadians Sisters who left this country at Easter are still waiting for passage in…” before the page is torn to ensure their safe passage out of China.

September 4, 1945 is the final (surviving) piece of correspondence written on official U.S. military letterhead, as the Sisters prepared to return to civilian hospitals .

In August 2019, we approach the 75th anniversary of the end of the second World War and take time to reflect on the devastating impact it had on the world. And while we pay tribute to all those who served their countries, soldiers and civilians alike, we also pay tribute to the Daughters of Charity missioned in China, who so courageously served those in need of care.