Veteran’s Day: Remembering those who served 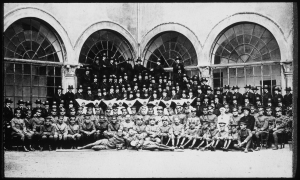 On Veteran’s Day, we remember all who have served in the armed forces, as well as the American Daughters of Charity who served during the Civil War, Spanish-American War, and World War I. Below is an account of an American soldier who died during the First World War. The account of his death is taken from the diary of two Sisters who served in Base Hospital Unit 102 (Loyola Unit) in Vicenza, Italy.

According to the U.S. Military customs, the body is carried in an ambulance, the coffin is covered with a large American Flag and flowers. The boy was buried in the British graveyard, about 10 miles from here, on the side of a beautiful hill. Not far from the Front. The coffin was carried to the grave by six of the Soldiers. Immediately after the coffin was lowered, the eight armed men who were standing in attention at the grave, fired over the grave three times. After this, the bugle was blown over the grave. The funeral Service was conducted by the Y.M.C.A.
–Sister Angela Drendel

An American boy from New York by the name of Holden died of Pneumonia. He leaves his parents and a brother and sister in New York. He was baptized before his death. When asked what message he would like to have sent to his people, he said that is a hard thing to have to talk about, and asked Sister what she would say. The subject was dropped for the present, and as he grew weaker, he was asked the second time and he said: Tell my people I have fought hard against death, but it must be. Tell them I am glad to die for my country. He was a lovely boy, just 21 yrs. Old. While in New York he posed for the Arrow collar for three years. Many remembered having seen his picture in the papers wearing the Arrow Collar. His Regiment took charge of the body. He was taken from the hospital to the cemetery. Six of the Sisters and a number of Nurses attended his funeral. His body lies at the foot of the Alps on a little mound, a very beautiful spot. He was buried with Military Honors. One of his comrades read the burial services at the grave. Sister Chrysostom wrote his mother a gave her an account of his death, also pressed one of the flowers from his grave and sent it in the letter.
–Sister Catherine Coleman