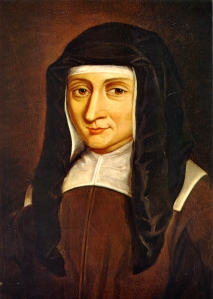 In 1613 Louise married Antoine le Gras, secretary to the Queen Mother of France, but their marital happiness was short-lived because of his poor health.  In 1623, Antoine was seriously ill and Louise was going through a deep depression. On the feast of Pentecost, June 4, 1623, Louise, while at prayer, was moved by a deep spiritual insight in which she understood that in the future she would be serving poor persons, living in a community, and practicing the evangelical counsels.  She wrote this “lumière”, or Pentecost experience, on parchment and carried it with her as a reminder that despite her difficulties, God was guiding her life. Enlightened that her new spiritual director would be Vincent de Paul, at this time Louise reluctantly accepted God’s plan.  Later, Vincent and Louise became close friends, confidantes, and collaborators in ministry.

Louise’s account of her Pentecost experience is below. The text comes from: Spiritual Writings of Louise de Marillac: Correspondence and Thoughts, edited and translated from the French by Sister Louise Sullivan, D.C. (New York: New City Press, 1991) p.1-2.

In the year 1623, on the Feast of Saint Monica, God gave me the grace to make a vow of widowhood should He call my husband to Himself.

On the following Feast of the Ascension, I was very disturbed because of the doubt I had as to whether I should leave my husband, as I greatly wanted to do, in order to make good my first vow(note 1) and to have greater liberty to serve God and my neighbor.

I also doubted my capacity to break the attachment I had for my director(2) which might prevent me from accepting another, during his long absence, as I feared I might be obliged to do.

I also suffered greatly because of the doubt I experienced concerning the immortality of the soul. All these things caused me incredible anguish which lasted from Ascension until Pentecost.

On the Feast of Pentecost(3) during holy Mass or while I was praying in the church(4), my mind was instantly freed of all doubt.

I was also assured that I should remain at peace concerning my director; that God would give me one(5) whom He seemed to show me. It was repugnant to me to accept him; nevertheless, I acquiesced. It seemed to me that I did not yet have to make this change.

My third doubt was removed by the inner assurance I felt that it was God who was teaching me these things and that, believing there is a God, I should not doubt the rest.

I have always believed that I received this grace from the Blessed Bishop of Geneva(6) because, before his death, I had greatly desired to communicate these trials to him and because since that time, I have had great devotion to him and have received many graces through him. On that occasion, I had a reason for believing this to be so, although I cannot now remember it.

Notes
(1) Louise de Marillac (August 12, 1591-March 15,1660) had wanted to be a Capuchin Nun. She had undoubtedly made a promise to God to do so. However, Father Champigny, her first spiritual director. told her that her delicate health would not permit her to become a religious. Following the advice of her family. Louise married Antoine Le Gras on February 5. 1613. He was secretary to the Queen Marie de Medicis. Their son, Michel, was born the following October 18.
(2) Pierre Camus, Bishop of Belley, a friend of the de Marillacs and of Francis de Sales.
(3) Sunday, June 4, 1623.
(4) The Church of Saint-Nicolas-des-Champs, rue Saint-Martin, the parish church of Louise de Marillac.
(5) Vincent de Paul was, at the time, a tutor in the deGondi household which was situated in the parish of Saint-Sauveur.
(6) Francis deSales, Bishop of Geneva and Founder of the Visitation, had died in December 1622.