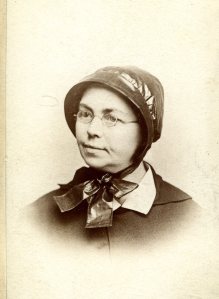 “When Mother Aloysia heard of the terrible disaster in Johnstown she was in Altoona making a visitation. She tried in every way to reach the Sisters but failed; and no trains were going through to Johnstown. Not to be balked in her determination to learn the fate of the Johnstown Sisters, Mother Aloysia took a train to Ebensburg; there she persuaded a farmer to drive her as far in the direction of Johnstown as he could go. Bumping through the deep mud over a country road in a springless wagon she reached Sang Hollow. The Pennsylvania Railroad Company had erected a single-track trestle ninety feet high to carry workmen and supplies into the devastated town. The engineer, Mr. Frank Adams of Altoona, was preparing to try it out with a single locomotive when Mother Aloysia arrived. She begged to make the trial trip with Mr. Adams but he had orders to cross the span and return alone. For the next rip a caboose loaded with tools and other equipment was attached to the engine. In this car Mother Aloysia was permitted to enter Johnstown with the work crew.” (pp. 86-87)