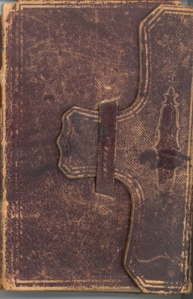 “A Monumental Legacy: Archbishop John J. Hughes and the Building of St. Patrick’s Cathedral,” an exhibition to record the life and works of Archbishop John Hughes, will open at the Consulate General of Ireland on Thursday, March 7 and will run through July 31, 2014. Included in this exhibition will be the cover and five digitized pages of the original leather handwritten book, “Instructions by Archbishop Hughes given to Sister Angela.” This book contains instructions given to the Sisters of Charity of New York by Archbishop Hughes in 1860. Sister Angela Hughes, the sister of the archbishop, was the third Mother General of the Sisters of Charity of New York, (1855-1861). 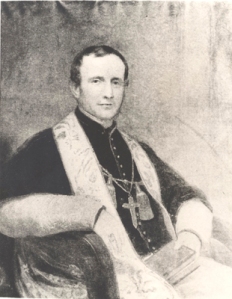 
This exhibition also highlights the relationship between Saint Elizabeth Seton and the archbishop. In the fall of 1819 the young John Hughes sought work with the Sisters of Charity of St. Joseph’s whose motherhouse in Emmitsburg was a short distance from Mount Saint Mary’s Seminary. Hughes had sought admission to the seminary and had been refused by Bishop Dubois. Elizabeth Seton got to know the young Hughes who opened his heart to her of his desire to enter Mount St. Mary’s and become a priest. She looked beyond his aggressive stance to his call and wrote to Bishop Dubois. Dubois, who could not refuse Elizabeth anything, gradually reversed his decision and John Hughes was admitted to the seminary. We know the rest of the story!