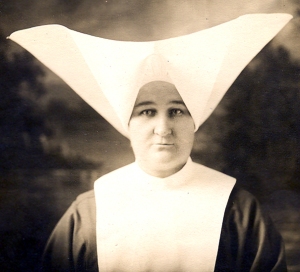 (Photo of Sister Chrysostom Moynahan used with permission of the Daughters of Charity Provincial Archives)
On April 2, 1917, the United States entered World War I. Hospitals served by the Daughters of Charity were quick to join the war effort. Only one group of sisters served with the American Expeditionary Forces: ten Daughters of Charity from the St. Louis Province under the leadership of Sister Chrysostom Moynahan (seen in the photo) as Chief Nurse. With about one hundred nurses recruited all over the country from hospitals served by the Daughters, they formed the nursing staff of Base Hospital #102 in Vicenza, Italy, the closest base hospital operating near the Italian Front. Sister Chrysostom, though past the preferred Red Cross age limit of forty, was well-equipped for her leadership role. She was the first registered nurse to serve in Alabama; her nursing experience included service in Portsmouth, Virginia, and Fort Thomas, Kentucky, during the Spanish American War. She had also built and administered Saint Vincent’s Hospital in Birmingham, Alabama, and laid the groundwork for Saint Margaret’s in Montgomery. The Loyola Unit returned to the U.S. in May 1919.

The Provincial Archives collections includes diaries kept by three of the Sisters, correspondence, artifacts, individual and group photos of the Sister, and a set of glass plate negatives showing the Sisters’ departure from the U.S., their journey overseas, scenes of the War, and views of post-war Europe. The glass plate negatives have been digitizd and are available for viewing in the Provincial Archives. A downloadable finding aid for the collection can be found on the Finding Aids page.