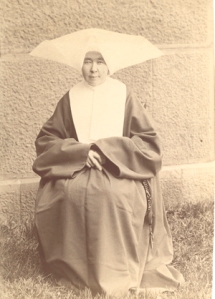 Sister Camilla O’Keefe (used with permission of the Provincial Archives)

We have been concentrating on our current exhibit “Over There,” which highlights the history of 10 American Daughters of Charity who nursed near the Italian front during World War I. But at this time of year, we rightly recall other Daughters who came face to face with the horrors of the Battle of Gettysburg, fought just about 10 miles to the north of St. Joseph’s Provincial House here in Emmitsburg. The Sisters met Union soldiers who stopped at the Provincial House on their way to Gettysburg and then as patients in the town’s makeshift hospitals after the fighting ceased. Today, July 1, marks the 152nd anniversary of the start of the battle, so we post in remembrance a photograph of Sr. Camilla O’Keefe, who both left accounts of the Union visitors to St. Joseph’s and would then nurse at the hospital at the Lutheran Seminary in Gettysburg after the battle.

Below is a passage from the Provincial Annals which describes the arrival of the union soldiers on the Emmitsburg Campus.

First appearance to our surprise, were the Cavalry located over in the meadows on the hill, as the morning of the 29th June 1863. The large meadows were all ready for mowing, the overseer, Mr. Brawner, had the mowing machine put in one of the meadows ready for work on the following day, but the squad of Cavalry saved him, the trouble and completely cleared the grounds of very blade of grass. Well, St. Joseph’s had to make the best of the loss. About 4 o’clock in the afternoon came the troops, some on horse back, making their way up the road from the barn, some up the road from the Hill, until the grounds around were actually covered with soldiers …

Before the arrival of the Army, the Artillery passed up the road in its way to Gettysburg, such a sight of canons was terrible … Now for the great Battle of Gettysburg, the most terrific of the war. During the 30th the Armies were making preparations for the great fighting! About noon on the first of July we heard very distinctly, the cannonading, Boom, Boom, so terrific, this kept on until the afternoon of the 4th, when the Confederates were defeated and retreated away as fast as they could that night. They had crossed the Potomac before the Federals reached too late to take prisoners.