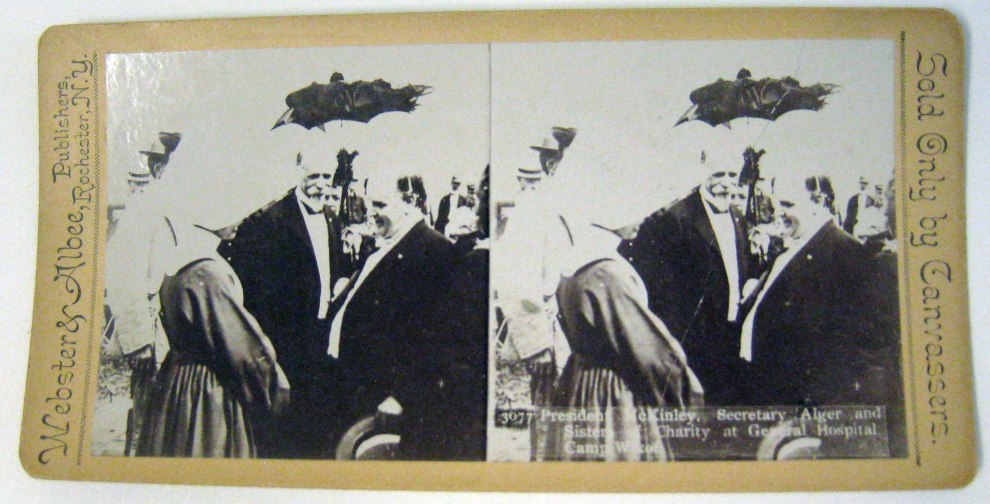 (Photograph reproduced with permission of Daughters of Charity Provincial Archives)
Our February blog series on U.S. Presidents continues with this stereoscope photograph showing, at left, a Daughter of Charity speaking with President William McKinley (right) who visited Camp Wikoff on Sept. 10, 1898. Between them is McKinley’s Secretary of War, Russell Alger. Camp Wikoff, located at Montauk Point, Long Island, New York, was established in August 1898 as a Federal demobilization and quarantine camp for troops returning from Cuba at the close of the Spanish-American War.

Although the sister is unidentified, it’s tempting to think that it might be Sr. Adelaide who, when asked by McKinley what the sisters might need, told him more orderlies. Forty were sent in the following day. All told, 201 Daughters of Charity nursed at eleven hospitals during the Spanish American War; 110 of them eventually served at Camp Wikoff. Of those sisters, four (Sr. Anastasia, Sr. Mary Elizabeth, Sr. Mary and Sr. Mary Agnes) died of exposure to typhoid fever brought home by their patients. This photograph is part of the collection that recently arrived in the Provincial Archives from Albany. Some of the details of the Daughters’ work at Camp Wikoff were taken from Sr. Gertrude Fenner’s 1949 thesis “The Daughters of Charity of St. Vincent de Paul in the Spanish American War,” APSL (formerly ASJPH) 10-1-6-#3.

One response to “DCs and Presidents – William McKinley at Camp Wikoff, Long Island, 1898”